You can DONATE through our dedicated fundraising website: www.crowdrise.com/ylvisfanclub2014

International fans worldwide can donate too - it all goes to UNICEF.
(This site is the official crowd-sourced fundraiser site recommended to us by UNICEF USA.)

If you encounter difficulties donating through the fundraising site you can use www.supportunicef.org or any other  UNICEF chapter or fundraiser, and then contact us with the details and proof so you can be included in the Ylvis Fan-Raised Total we are tracking.

Ylvis fans around the world are donating to UNICEF to honor Ylvis in the ongoing YLVIS Fan Club UNICEF Fundraiser!

Inspired by Bård Ylvisåker’s tweets from March 14, 2014 in which Bård encouraged his followers to donate to UNICEF, and in light of Ylvis’ support of UNICEF on their talk show  I Kveld Med YLVIS the YLVIS Fan Club created a fundraiser to raise money for UNICEF and track fan contributions.

Fans can donate online through a dedicated fundraising website setup by the YLVIS Fan Club, or though their local UNICEF chapter and then provide proof of donation to the YLVIS Fan Club to be included in the Fan-Raised Total.

Donations have come from fans around the world, including, but not limited to: the USA, Canada, Norway, Denmark, Brazil, Argentina, Singapore, Thailand, Poland, Germany, Austria, Italy, Finland, Russia, Ukraine, Sweden, and the United Kingdom.

The YLVIS Fan Club received a special response from Bård in regards to the UNICEF fundraiser via Ylvis' management:

“Wow – thanks you guys. This is the best present anyone has ever given me

and this is from a guy who’s received an Xbox, diamond encrusted roller skates,

and a live tiger. Seriously, it means a lot to me

to see our fans supporting such an important charity as UNICEF.”

Vegard took to Instagram and tweeted his appreciation for the contributions of fans after being notified on his birthday:

“Wow! I'm speechless! This is the best gift I've ever gotten!

Except for the dyed pressed leaf I got from my two year old. It looks awesome...”

In just four months time the fundraiser hit over 50% of its goal of $10,000 U.S. Dollars and was written about on the Norwegian news site Aftenposten.

In 2015 the YLVIS Fan Club partnered with UNICEF Norge to run campaigns for fans to donate directly to Ylvis’ home country UNICEF chapter in Norway for Bård and Vegard’s birthdays.

YFC continues to track fan contributions and now hopes to double the goal to help even more children! Please donate to the fundraiser!

Ylvis is a strong supporter of UNICEF

Please join with fans around the word to show your support and donate to UNICEF to help give children around the world a chance at a better life!

"We love the UNICEF and we LOVE what the fans are doing for UNICEF! ...We're proud that something we do can lead to donations. Very proud. Thank you."
- Bård Ylvisåker 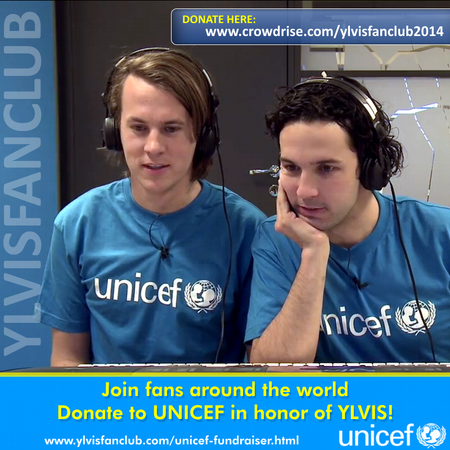 is in the Norwegian News!